Sitting down for an interview and mini concert with local singer/songwriter Angela Meyer this afternoon was a reminder you don’t have to be in Nashville to experience authentic country music. Angela lives just a few miles from me in tiny McCausland, Iowa, and she agreed to talk when we met last month after her set at The Bucktown Revue, an enjoyable Prairie Home Companion-ish show that plays monthly September through May in nearby Davenport.

Angela, 24, comes from a line of Iowa musicians. Her grandmother and grandfather, from Waterloo, played guitar and her mom, Christa Meyer, sang in a country/rock cover band when Angela was a little girl. “It was her passion but she was Mom first,” explains Angela, who started playing guitar when she was about 10 and later found a knack for writing songs. 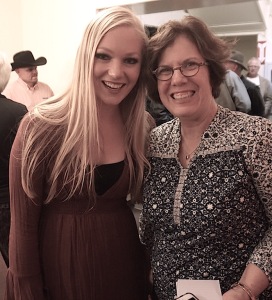 At 19, Angela snagged a two-song set at the famed Bluebird Cafe in Nashville. “My parents drove all night to get me there,” she says. Since then she’s steadily pursued music while also earning a college degree in business and working to pay the bills. Currently, she’s a nanny to three young children, writing songs and booking gigs during their nap time. Two to three nights a week she performs around eastern Iowa and tonight she’s onstage at Riverview Roadhouse in Le Claire. On June 23rd she will play at Green Tree Brewery (also in Le Claire) and on June 30th she is booked at Baked Beer & Bread Company in Davenport. Check out her other shows here.

Angela says neither fame nor fortune are goals.  “I’d like to make a living doing music so I can put my whole focus into it,” she says. But she’s not planning to move to Nashville anytime soon. She and her boyfriend, Dean, who works as a dump truck driver and raises cattle, recently purchased a home in McCausland, Population, 314.

“I thought, ‘This is a place where a lot of country songs could be born,'” Angela recalls observing on the day she moved in. She says she wouldn’t trade country life and enjoys helping Dean with cattle chores; trailriding on her horse, Tuffy; attending or showing at horse shows and cheering on Dean and his family at rodeos. He is a bullfighter (in the ring to help keep riders safe) and his brother is a bull rider.

Angela shuns “cookie cutter” music that’s focused on tailgate parties, drinking beer or hooking up.  She even pokes a little fun at pop country songs that reference country girls with tanned legs.  “Country girls have tanned arms,” she says. “But we have pale legs because we are wearing jeans all the time.”

On her YouTube channel, which she posts to each Thursday, Angela has covered a wide range of country tunes, from Tennessee Ernie Ford’s Sixteen Tons to Miranda Lambert’s Tin Man and Brothers Osborne’s It Aint My Fault. But big country hits are less prevalent on the channel than more obscure material like Sundy Best’s Thunder and Cody Jink’s Hippies and Cowboys or Matt Mason’s Reason to Ride.

For her originals, Angela says she’s a fan of somber themes and sad songs. She gravitates towards biographical stories and found herself caught up in a sea of historical research when she wrote Among the Willows about the first two outlaws hanged in Wyoming.

The trauma of mental illness is another topic she holds dear. Like me, she knows the pain of losing a close friend to suicide. (Read about my friend Marlene here.) Angela has used that pain to feed her creativity and help raise awareness about suicide prevention with her song Wish it Was You. It is a tribute to Canadian professional bull rider Ty Pozzobon who committed suicide earlier this year as a result of depression after multiple concussions he suffered during his career. Proceeds from Angela’s haunting song go to the Ty Pozzobon Foundation and it can be found on iTunes here.  View her performing Wish It Was You today:

The video of Angela Meyer singing her original Wish It Was You was shot June 17, 2017, at Lady Di’s in Parkview, Iowa. Sorry for the less-than-stellar quality of the recording. I claim no rights to the content – that’s all Angela’s good work!

I sure enjoyed getting to know Angela and her music and I’m betting you will too.

Learn more about blogger Karen Bernick here. Please feel free to share this article or others. But please use photos with permission only – just email me with any requests. If you like this post, please consider following me here, liking my Facebook page Karen Loves Country or following me at Twitter. Thanks for reading! #Iowa #AngelaMeyer #TyPozzobon #RiverviewRoadhouse #BucktownRevue #KarenLovesCountry #MomLovesHerMusic

One Response to “Authentic country music here in Iowa”