Seeing the massive painting depicting a 91 year old man who never wrote a hit song, wore a Nudie suit (I presume), or drew attention to himself throughout his long life in Nashville is definitely worth a 10 minute drive or Uber ride from downtown to the western core neighborhood called The Nations.

The towering mural was painted last year onto a 200-ft., decrepit grain silo by Australian artist Guido van Helten. He is a young artist with international acclaim for creating exquisite outdoor mural portraits specific to locales across the globe. Watch the cool documentary by Geo Leros on van Helten’s work below. 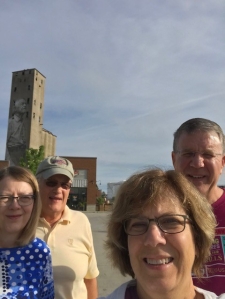 an NPR story shared by a Facebook friend last spring. So when Dan and I were in Nashville earlier this week we drove with our traveling companions Leann and Joe to the corner of 51st Avenue and Centennial Boulevard, not far from where the old concrete grain silo sits.

Seeing it firsthand is even more spectacular than I imagined or can explain. The grandeur of Mount Rushmore comes to mind because of the sheer size. But the subject’s facial expression, posture, and gently curled hand are Avedon-esque details that reveal life and humanity. On a side wall, there are images of two young boys reaching upward to reportedly represent the future.

Surrounding the silo are chic coffee bars, new strip malls,  restaurants, and other signs of progress happening. A construction worker who pulled up in a nearby parking lot gestured for us to move closer as if he’s welcomed countless visitors before us.

My interest in, and reaction to, the silo are exactly what the project’s organizers were going for, according to Mary Carolyn Roberts, a neighborhood resident, local realtor, and member of the Metropolitan Council which governs Nashville and Davidson County.  We talked by phone yesterday and she explained she moved to The Nations in 2010 because its location close to downtown Nashville screamed potential.  But the zoning mix of residential and industry – it was once home to four fertilizer plants, a state prison, the silo’s former operator the Gillette Grain Company and many other industrial sites  —  was “tricky” and developers often passed on by.  “I wanted to use what was here and make it something beautiful,” she said.

Saving the old silo became Robert’s mission when she was elected to the Metro Council in 2015. She saw it as a way to pay homage to The Nation’s heritage and jumpstart its future.  To her surprise, a principal at a Nashville development firm with eyes on transforming a 38-acre parcel surrounding the silo, latched on to the mural idea.  “It was like I heard angels sing,” Roberts said of the firm’s eventual decision to bring van Helten to Nashville to paint and move forward with the development project now in the works and named Silo Bend.

From start to finish, the artist stayed in Nashville for about 15 days in May of 2017. Councilwoman Roberts even put him up to save project costs and facilitate his introduction to locals she thought represented the neighborhood.  “He has a weird process, like nothing I’ve ever seen,” said Roberts  “He never made notes. He just gets feelings for people.”

In the end, van Helten found his “soul connection” in Mr. Lee Estes, a then 91 year old man who worked and raised his family in the neighborhood and volunteered to serve meals at St. Luke’s Community Center. “He is a pillar of the community,” Roberts said. “He went over (to St. Lukes) and fed the poor three or four times a week for fifty or sixty years.”

Ms. Roberts is happy with the impact the silo is having.  “The old people recognize it as part of their heritage and the new people embrace it as

part of their lineage,” she noted.

After our visit to The Silo, we stopped at the Centennial Cafe for a fast, reasonably priced, and yummy breakfast of omelets, grits, and biscuits and gravy.  Our waitress told us it was fun to watch van Helten’s progress as he worked aboard a giant crane to sketch a grid and then use aerosol paint to bring Mr. Estes’ image to life.

The Silo has been listed as a must-see for Nashville visitors in search of the city’s best murals. I highly recommend it for anyone who is looking for a diversion in Music City and who is interested in neighborhoods.

The video is shared via Geo Leros’ Vimeo page.