The film brings to life vintage barns in Iowa, Kansas, Wisconsin, Michigan and Ohio. But The Barn Raisers isn’t just a lesson in Midwestern folk architecture. Through interviews with barn owners, writers, historians, craftsmen and preservationists, plus historic photos, vintage film reels and new footage taken at historic barns, the film weaves together stories of the barns and the people that built them. It introduced many barns, including a small show barn built circa 1915 at the G.C. Good Farm in Ogden, IA, to house Belgian champion “Farceur.” The film also featured a round barn outside of Davenport, and a Frank Lloyd Wright barn that’s part of the Taliesin Preservation in Spring Green, WI, plus many more.

The Rundles, who were present at the showing we watched at the Putnam Museum in Davenport, say they hope their movie will instill a greater sense of appreciation for barns and their importance in heartland history.

“If we don’t know history, we don’t know who we are and where we are going,” said Kelly Rundle, whose fascination with farms, barns and rural life stems from time he spent as a boy working at grandparents’ farm in New Auburn, WI. 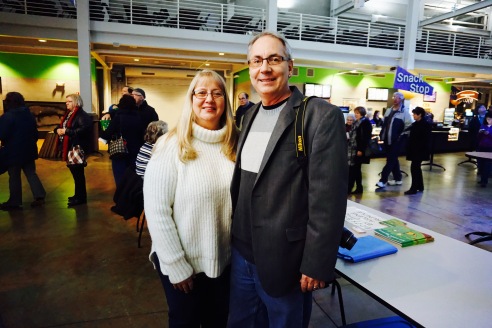 Filmmakers Tammy and Kelly Rundle have produced more than a dozen historical documentaries and have received two Mid-American Emmy nominations. In 2011, they earned a Golden Silo Award for Outstanding Preservation in Agriculture from Silos & Smokestacks National Heritage Area.

The Barn Raisers got me thinking about barns in my own life.  As a kid, I often went with my folks to visit their friends, Arden and Ann, at their dairy farm in Lily Lake, a super small town about 15 miles west of St. Charles, IL, where we lived. If we got to go into the long white barn during milking, that was a bonus. I was fascinated to watch the process as Arden moved constantly, from cow to cow, and side to side, to attach the bucket milkers. He seemed to enjoy the chance to explain each step. I remember (or recall hearing about) my mom asking if the cows liked the music (can’t recall if it was country) he played during chores. “Not sure, but I do,” he said.

Back then I liked cows. But I was in love with horses. For my 9th or 10th birthday, my parents gave me ten riding lessons at a stable outside of town. The stable was functional and efficient, a green metal pole barn, but it had zero architectural or historical interest. The more interesting horse barn in my life came later at Circle H Stables after we moved to Greendale, WI. That’s where my grey dappled pony, Patrick, was boarded.

Circle H was a fun chapter in my childhood. Five or six other horsey girls were regulars, too. Every day was sort of like day camp without the counselors. We were mostly tame. When we weren’t trail riding in nearby Whitnall Park, we played hide-n-seek, staged pretend horse shows, surveyed the cats’ hiding spots for new kittens and ate our brown bag lunches with grape pop in the tack room. Once my friend Chrissy and I found a pack of cigarettes and hid above a lime kiln (more about why that was there later) behind the barn to try a few puffs. One of the farm hands spotted us and chewed us out. I think my mom 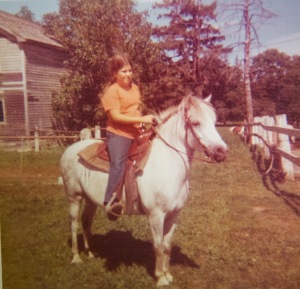 figured it out, too, because she gave me a “Don’t Smoke” talk a few days later. It worked, I stayed off the stuff, except for a few times in college.

Back to the cool barn and lime kiln at Circle H. The farm had been a prosperous quarry owned by the Werner Trimborn family who bought the farm in 1851. He used the limestone barn to keep the horses that hauled the stone from the fields. The kilns were used for processing it into lime. After cement killed Trimborn’s lime business, the farm was used for dairy cattle and later the federal government acquired the farm as a housing and staging area while constructing the greenbelt community of nearby Greendale. During the Circle H days, the main stone barn, and a nearby threshing barn, were the stall barns. Today, Trimborn Farm is part of the Milwaukee County Historical Society. It is has become a popular site for tours and festivals, and a trendy venue that you can rent out for weddings and other events. Years ago at a craft fair in Madison I found a print of the Trimborn Farm stone barn from a painting by Bridget McCabe Matzke. It is a favorite piece of art. 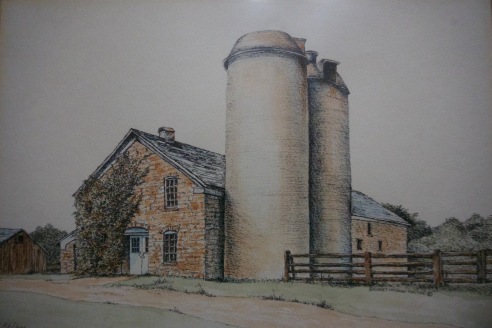 I found this print of a painting by Bridget McCabe Matzke featuring the stone barn at Trimborn Farm, Greendale,WI.

City girl on the farm. When my husband Dan and I were newlyweds, he owned a dairy herd that he operated at his parents’ farm near Walcott, IA. We lived in town and both of us had telecommuter jobs – he edited a dairy magazine and I wrote for an ag PR firm. But we worked in offices his dad built in the farm’s machine shed. So we spent most of our time on the farm.

Our herdsman (Brian first, then Doug) was in charge of daily cow duties but most mornings and afternoons Dan did chores in and around the milking barn. Sometimes I tagged along to chat while he worked and eventually I learned to help a bit. Once in awhile Dan returned late at night to the barn to attend to a calving or sick cow in the barn. In the summer, he and his dad filled the big barn’s hay mow. Once I shot a video for a feed company with the Bernick barn as a backdrop. 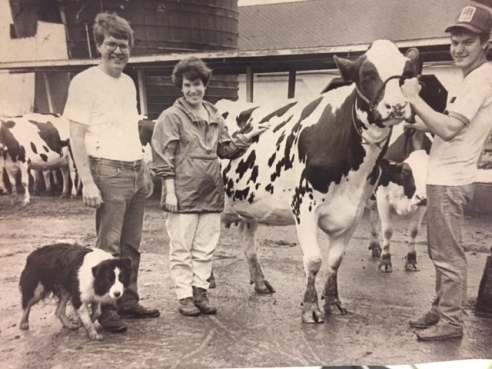 It was was a rainy, muddy day when Bill Tubbs from the North Scott Press came and took our picture with the cows. Brian, right, was our first herdsman. Picture used with permission.

Before seeing The Barn Raisers, I’d honestly never thought much about the history of the barn itself. So I called my mother-in-law, Alberta, to inquire. The barn was built by a crew in 1909, two years after her parents, Albert and Emma (Soenke) Illian, married and moved to the farm. Albert bought the place in 1906 after attending ag classes at Iowa State College. Albert and Emma used the barn to house horses used for field work and they had a few dairy cows for the family’s milk supply. They also filled the barn with lots and lots of hay each summer like Dan did later. 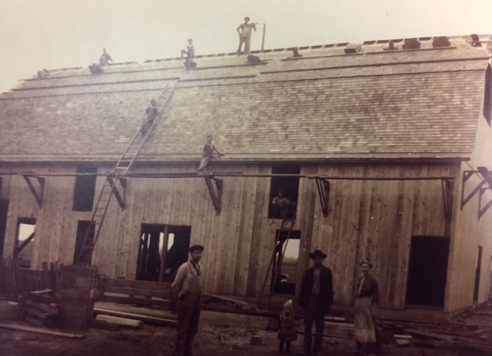 Alberta, who turns 90 this June, was the youngest of six sisters. In 1944, Successful Farming did a story about her family’s modern farming practices and the great help she and her sisters were to their folks. In 1949 Alberta and married Eugene Bernick and they bought the farm in 1954. Their farming operation was concentrated on dairy and Gene, who passed away in 2015, was also an auctioneer. They retired from dairy farming in 1988 when Dan bought the herd. The farm remains in the family. 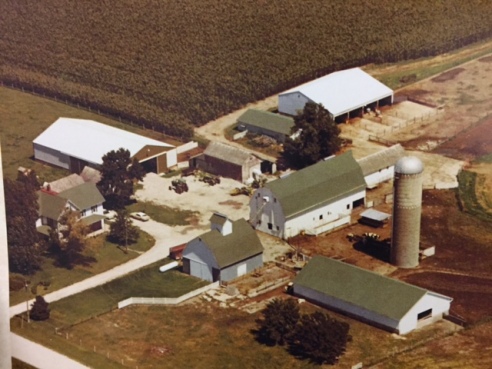 One more barn comes to mind as I write. That’s the barn at Codfish Hollow outside Maquoketa, IA, where owners Shawn and Tiffany Biehl host outstanding concerts each summer. The barn, in combination with amazing music, is what makes the venue one of a kind. Read more about Codfish Hollow here and here. 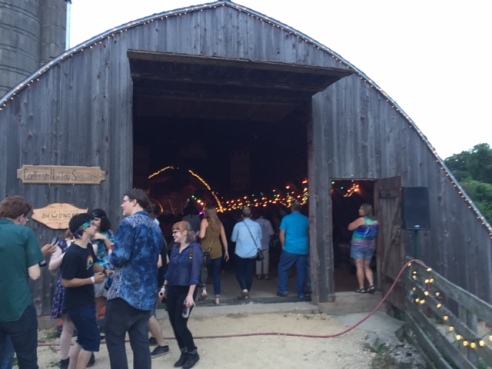 The Barn Raisers is a great movie that will be shown in select theaters and released as a DVD and for streaming later this spring. It will likely be shown on PBS stations too. Learn more here.

Tell me your barn stories by sharing a comment here.

Learn more about music fan Karen Bernick here.  Please feel free to share this article or others. But please use photos with permission only – just email me with any requests. If you like this post, please consider following me here, liking my Facebook page Karen Loves Country or following me at Twitter. Thanks for reading! #TheBarnRaisers #FourthWallFilms #TrimbornFarm #CodfishHollow