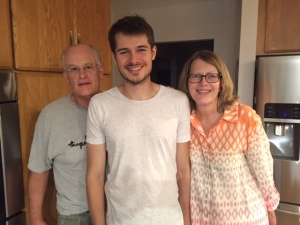 Merritt is the son of my husband Dan’s cousin, Leann Graves, and her husband, Joe. The band’s stop in Iowa was tucked between gigs in Colorado, Nebraska and Chicago. Their tour will also send them through Michigan, Ohio, Pennsylvania, New York, South Carolina, Florida and Texas before they head back west.

As Joe Graves welcomed folks to the lawn, Leann and her friends, Linda and Cher, served up walking tacos, fruit, chips and other goodies. Two giant decorated cakes gave the event a celebratory feel, for Merritt’s homecoming and for the band’s impressive musical accomplishments and social conscience.  “It’s a proud moment,” said Leann. 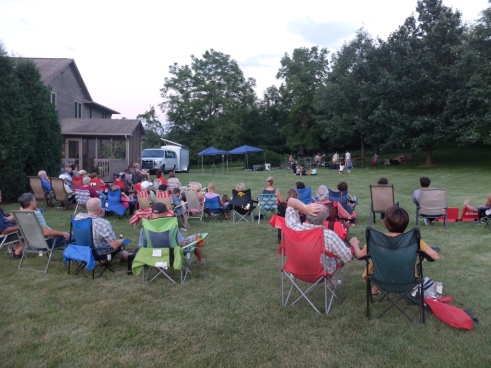 Just six days before the concert Trapdoor Social introduced its first full-length album, a 14-song set featuring the buoyant and affirming first single Sunshine. (Check out the lyric video at the bottom of the post.)  The band has built a strong following, especially in Colorado and southern California, and they have enjoyed radio play from a number of major market stations around the US (including regular rotation on Q87.7 in Chicago). For much of 2014 and 2015, their song Away was featured in a national Discount Tire/America’s Tire television ad campaign. See a sample here:

The video is linked from Discount Tire’s YouTube Channel. (https://www.youtube.com/watch?v=DMcjgrz9pIU) I claim no rights to the content.

Last June, Trapdoor Social (they claim there’s no story behind the name, just an interesting combo of words) hosted its first Sunstock Solar Festival, a completely solar-powered, not-for-profit festival featuring some pretty big names including the Cults and the Wavves, along with Trapdoor Social and more. The event, held at The Autry Museum of the American West in Los Angeles, drew about 3,000 people and donated 100% of festival profits to install new rooftop solar power for Kids Cancer Connection.

Sustainability and music are what drew Merritt and the band’s co-founder Skylar Funk together in the first place. They met in 2008 at Pamona College where they were both studying environmental analysis. They each landed day jobs – Skylar installing solar equipment and Merritt doing urban farming — but eventually started writing songs together and formed the band at the end of 2011.

“It (sustainability) was showing up in our lyrics, and we were talking about it at shows and in interviews, but we needed a visual centerpiece,” Merritt recalls.

The band’s cargo trailer, parked for the concert just behind Joe and Leann’s house, is equipped with solar panels and an internal controller-battery-inverter system to fully power the sound and lights at each of Trapdoor Social’s shows. The trailer is capable of producing 3.5 kilowatts but the band only uses about 1 kilowatt per show. To demonstrate the rig’s clean power generating capabilities, the band sometimes sets up illuminated artwork or charging stations to allow concert goes to juice their cell phones.

The backyard gig was a chance for Merritt and his bandmates to make good on a promise to Joe and Leann. The couple purchased a “house concert” as part of a special fundraiser the band organized a few years ago. The band raised $30K for solar roofing for Homeboy Industries in LA.  (If you aren’t familiar, Homeboy gives training, hope and encouragement to gang-involved and previously incarcerated men and women to help them become contributing members of our community.) The band’s heart for giving is remarkable. 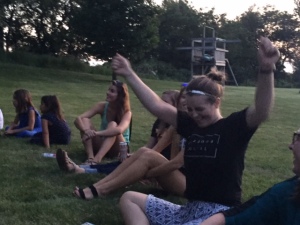 “This is our first solar show in Iowa but hopefully not our last!” Skylar said as they kicked things off.

I have to admit the 20-30 yard span between the band and crowd at the beginning of the set seemed a little unusual to me; I’ll often pay a premium to get close for concerts. So when Merritt’s sister, Susan, and a few of her friends broke the ice by running up to the front I looked at my 14-year-old niece, Emma. 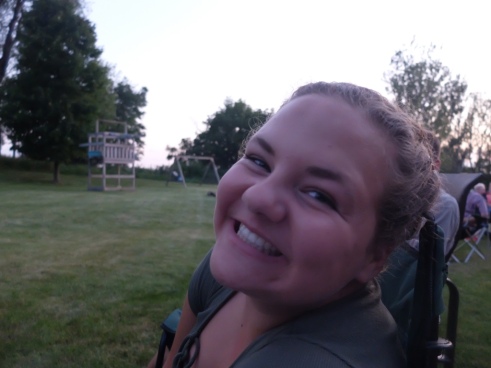 “Wanna move up?” I asked. Emma nodded and as the next song started we dashed to the front with her younger sister Lucy not far behind. By the end of the concert, Susan convinced most of the crowd to get on their feet and dance. (Susan and Merritt’s younger brother Conner had to be in Ames to help with Iowa State University’s orientation so he missed the concert.)

I enjoyed the music a lot. I especially liked the high energy tunes Fine on My Own, Sunshine  and Away (Lucy’s fav) and found myself singing along with “in the city, feeling pretty” from Distance.  I was touched by Skylar’s tribute to his dad in Old Wings and was wowed by the five-part harmony on that same song. Trapdoor Social’s sound blends many types of music, except maybe country. (Oh well, my friend Cathy routinely reminds me in reality my taste goes beyond the genre.)

I asked Merritt what it was like to perform in the same spot where he played as a kid.  “A little silly,” he said. “But also heartwarming to see a bunch of people I haven’t seen in a long time enjoying the music.”

The band’s slogan Alternative Rock For Alternative Energy seems to fit perfectly as a tagline and promotional hook.  “Our goal is to fire up young people,” Merritt explained.

And once in awhile older people, too.

The clever lyric video for Sunshine is linked from Trapdoor Social’s YouTube channel. https://www.youtube.com/watch?v=MGQ1q_lYVto. I claim no rights to the content. 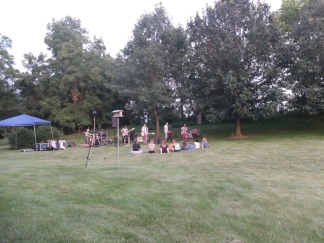 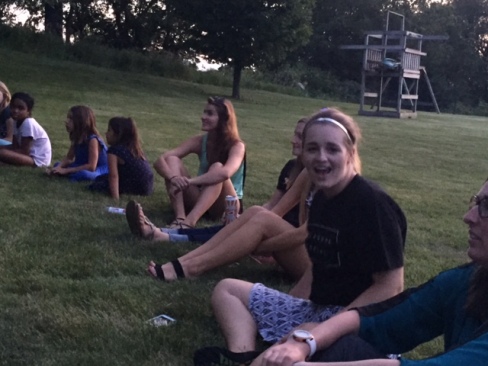 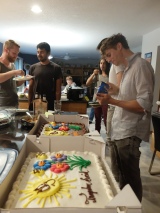 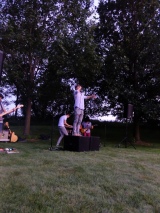 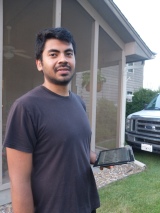 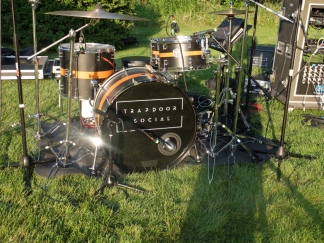 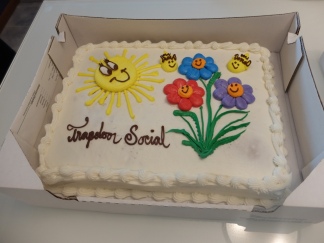 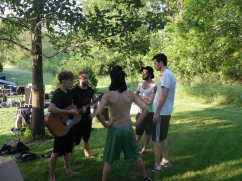 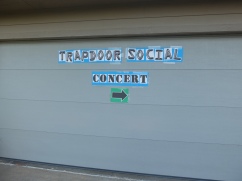 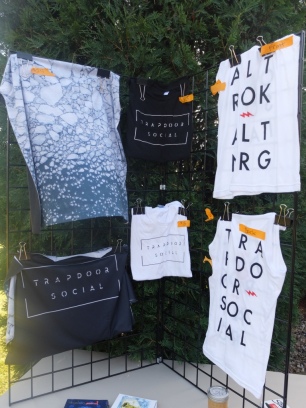