In case you didn’t know Trent Tomlinson was a co-writer and the guy with the big idea for the Brett Young’s In Case You Didn’t Know (ICYDK).  The song was country radio’s #1 hit for four weeks in June 2017 and is certified Platinum 2X, meaning a bazillion copies were sold.  I was familiar with Tomlinson’s radio success in the late 2000s (One Wing in the Fire, Drunker Than Me, Just Might Have her Radio On) but didn’t realize until last night the Kennett, MO, native is a current big time hit songwriter. He’s also a very good entertainer and singer with a great baritone tone that sounds even better live than on the radio. 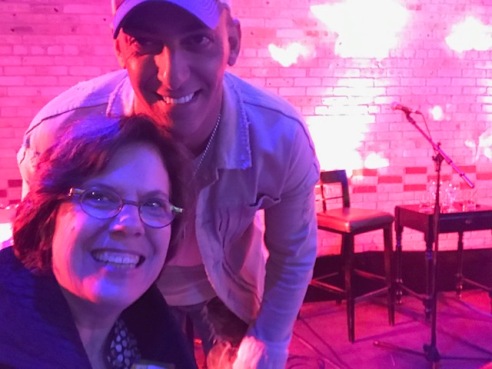 Perhaps I was a bit star struck meeting Trent Tomlinson at the Celebrate GREAT benefit.

Tomlinson was in Janesville, WI, with his friend, fellow Nashville musician and songwriter Shane Decker, creative director at Mucho Love Music to entertain the folks at the Celebrate GREAT: Night in Nashville benefit for the Boys & Girls Club of Janesville, WI.  Tomlinson opened the show with ICYDK which he co-wrote with Young, Tyler Reeve, and Kyle Schlienger in 2015 on a writing retreat in Mexico. Apparently Tomlinson mentioned something his mom said shortly after his dad passed away.  “She said, ‘In case you didn’t know, I love you,'” relayed Tomlinson, explaining the idea morphed into a love song. He said it was written carefully without using the word “love” to address the difficulty some men face in saying “I love you” to the girl of their dreams.  Not my experience (Thank you, Dan!) but an interesting and clever concept. 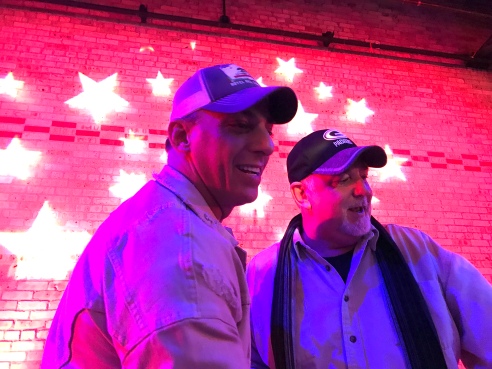 Nashville songwriters/musicians Trent Tomlinson and Shane Decker were the featured entertainment at Celebrate GREAT for the Boys & Girls Club of Janesville, WI, October 24, 2017.

me to join him and my Aunt Betty at last night’s benefit. It was an enjoyable evening with dinner, a stream of hit country songs and some fun, interesting banter from the songwriters led by WJVL country radio personalities Ken Scott and Mike Austin. The venue – the Janesville Armory – was super cool, too. The restored 1930 building is listed on the National Register of Historic Places and has a stunning array of brickwork, terrazzo floors, and decorative iron. The pre-show entertainment featured some cute singing and dancing from members of the Boys & Girls Club.

Decker, a native of Indianford, WI, was chatty and jovial, obviously happy to see many of his family and friends in the audience. He shared the back story on his 2001 hit Mrs. Steven Rudy performed by co-writer Mark McGuinn. McGuinn’s crush on a neighbor lady inspired the song and the duo invented her name from a phone book. Decker also gave some scoop about being roomies with Tim McGraw before he married Faith Hill. He attributed McGraw’s superstar success to a natural “it” charisma inherited from his dad Tug McGraw, plus a keen ability to consistently pick great songs that perfectly fit his personality. Awe. McGraw’s Humble and Kind popped right into my head. Decker even invited a local guy named Wayne, who was his mentor and friend, up to sing a song. Decker and Tomlinson also gave some advice to budding country musicians. They urged hopefuls to chase their dreams and said moving to Nashville is a must for making it in country music. “You gotta be present to win,” said Decker.

What a fun night out for a country fan.

My blog is just for fun and entertainment – learn more about how I started here. Please feel free to share this article or others. But please use photos with permission only – just email me with any requests. If you like this post, please consider following me here, liking my Facebook page Karen Loves Country or following me at Twitter @fanmama1. Thanks for reading! #TrentTomlinson #ShaneDecker #CelebrateGREAT #BoysAndGirlsClub #Janesville #Wisconsin #BrettYoung #InCaseYouDidntKnow #CountryMusic #JanesvilleArmory #WJVL  #KarenLovesCountry #MomLovesHerMusic