When honky-tonker Luke Bell headlines November 28 at The Village Theatre, Iowa City based singer-songwriter Brian Johannesen will be one of the talented opening acts at the Davenport, IA, show produced by Sean Moeller for his Moeller Nights series. 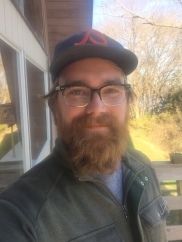 I had the pleasure of talking with Brian yesterday by phone. We spoke about his Midwestern background; his music that “squarely fits” in the Americana genre with its rockabilly, country and folk influences; songwriting styles; venues; performing and Nashville.

Brian recently moved back to Iowa after an almost five year stint in Nashville. He went to Music City in 2012 to attend Belmont University where he picked up an MBA focused on the entertainment and music business. That was after earning an English degree at the University of Iowa and spending a few years gigging around Iowa City with the Grand Tetons, a country band he formed with buddies during college. His start in music began during high school in the Chicago suburbs when he fooled a kid into believing he could play bass and got a gig in a punk band.

Living in Nashville was a great learning experience in many ways. After grad school, Brian did some touring as a solo act and connected with other musicians and songwriters, including Ryan Joseph Anderson who will also be on the bill at the Bell show. He caught as many shows around Nashville as he could and attended the occasional “picking party” where folks gathered in somebody’s home to play together and share new songs. “I got so much better by being exposed to the people there,” he says of Nashville.

That MBA came in handy too. Eventually Brian landed a job as a talent buyer for Madison Entertainment, a talent booking company. With that job, he fills show calendars with acts at venues such as 12th & Porter in Nashville and the Historic Scoot Inn and Parish in Austin, TX. The job allows him to work around touring and songwriting, and was relocation-friendly when he and his wife, Haley, who is from Tiffin, IA, decided to move back to Iowa last summer.

But why would a country singer-songwriter leave Nashville?

Practicality is one big reason. “For the first 6-8 months living in Nashville was like living in a big small town,” Brian explains. It was comfortable and fun. But in early 2013, the New York Times called Nashville an “it” city and the TV show Nashville hit.

Music City was on the verge and Brian found himself living and working in a city that was, “logistically, becoming a hassle” due to crazy rush hour traffic, a lack of public transportation and scarce or premium-priced parking at venues around town.

What’s more, “Nashville is a business town,” Brian says. “You go there to make connections and work on getting a manager and record deal. But any money you make as a musician will be made outside of Nashville.”

That means touring. And most of Brian’s gigs were happening in Chicago, Iowa, Minnesota

and other Midwestern locations. “It just felt crazy to be driving 9-12 hours just to start a tour,” he says.

He also missed home: “Every song I wrote was about the Midwest.”

Songs like Two Hot Dogs and A Coke and Moving On certainly bring to mind Midwestern sentiments and images. Those, in particular, reminded me of two famous Windy City songwriters for good reason. “Growing up in Chicago, a John Prine and Steve Goodman kind of songwriting is embedded into me,” he says. But Guy Clark and Bruce Springsteen are also influences, hence a multifaceted feel to his music.

We talked about writing a song. “It starts with one line stuck in my head,” Brian says. “That one line will inform the vibe of the song, then comes the guitar and melody, and then the lyrics.”

Brian reveals his soon-to-be completed album Northern Town is “kinda all over the map” music wise with rockabilly, country and folk imbued into it. The album was recorded at Flat Black Studios in Lone Tree, IA, and was produced by his friend Ryan Joseph Anderson. Brian plans to showcase songs from the new album at the Moeller Nights show, including Two Hot Dogs and a Coke:

I hope you enjoyed my #KitchenTableChat with Brian Johannesen.  If you are a country artist or songwriter with an interesting story to share, please contact me.

Please consider clicking “follow” on this blog. Or, like the KarenLovesCountry Facebook page. Or follow me at Twitter at @fanmama1. Thanks for reading! #Americana #Iowa #Nashville #MoellerNights #NorthernTown   Brrrrr…The snowy feature photo was made by Haley Johannesen.  The black & white image was made by Joshua Black Wilkins.  The other shot is a selfie, kindly made by Brian right after our interview. Thanks!