It is no secret I’ve been closely watching Trent Harmon’s ride after his American Idol win. This past week was big for him. He has officially moved from the role of reality TV star to emerging country star! His new single There’s A Girl was released on iTunes on Thursday and it is showing signs it has what it takes for the wild ride of the chart races.

When I went to bed last night the song was #7 on the Billboard and Twitter Emerging Artists, according to my Twitter pal @Music4Jeanne. This morning, after some late night/early morning social media flurries, it is now #4 on that list.  The Billboard and Twitter Emerging Artist list includes the “most shared songs from up-and-coming artists on Twitter over the last 24 hours.”

I don’t pretend to be an expert on the song charts (perhaps I’ll dive into it to learn more for a future post) but what’s interesting to me is how Trent and his fans (taking a little credit, myself) are helping 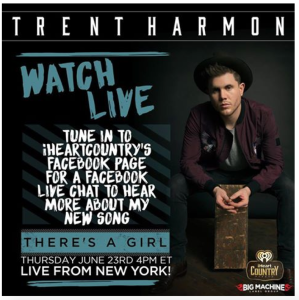 the song navigate the charts through social media.

On Thursday (6/23/16) at 4 PM eastern Trent appeared on Facebook live from iHeart Radio in New York. Trent listened along with an iHeart host (searching for his name) as There’s A Girl debuted, a first live song launch like that for iHeart who played the song across all its country radio stations during the live feed. As of Sunday, about 50K have have watched that segment since Thursday. Trent pushed it out across his own Facebook page, Instagram, Twitter, Snapchat and Periscope. Even before the surprise launch on iHeart (it wasn’t supposed to go out until Friday) some super fans found the song on iTunes late Wednesday night and made noise about it via their socials so it even got a little head start Thursday morning.

Next, on Friday (6/24/16) morning, Trent and his excellent band appeared on Fox and Friends for their All American Summer Concert Series.  There’s A Girl was well received by the crowd, show hosts and his fans like @TheRealAlexis who Tweeted:

.@TrentWHarmon KILLING it this morning on @foxandfriends with his new single #TheresAGirl #TAG624 get it now!! ❤️ pic.twitter.com/kmDAS1iaVq

By 10:30 AM on Friday (6/24/16), I noticed that There’s a Girl had landed in the #4 spot on the iTunes Hot Country Songs chart, just behind his mentor Keith Urban’s Wasted Time.  To me, that was huge! I Tweeted the news myself…and so did other fans whose Tweets and Retweets; Facebook posts, likes and shares; Instagram chatter, Snapchats and other social media posts persisted throughout the day Friday and over the weekend.

The song made its way into the general top 100 iTunes charts on Friday, hitting #78, according to a monitoring website called iTunesChart.net. On Monday (6/27/16) evening, There’s a Girl was sitting in the 100th spot on iTunes top 100 and remained #4 on iTunes Hot Country! Trent is #2 behind Chase Rice on the New (Country) Artist Spotlight list.

Smart and gracious Trent took to Twitter late Friday morning to say thanks to his fans:

🙌🙌 -Wayyyy upppp I feel #blesssst (I owe it to YOU GUYS) Thanks for doing this w/ me. It means more than u know. … pic.twitter.com/PwqVTtDj6k

Fast forward to the wee hours on Saturday night/Sunday morning when my Twitter pal Jeanne noticed Trent’s strong showing on the Billboard and Twitter’s Emerging Artists chart. He was #7  and she tossed out the Tweet below which drew lots of attention, including from Trent himself.

You gotta believe that Trent’s RT of that message to his 74K followers sometime after midnight helped move the dial to push the song to #4 on Billboard and Twitter emerging artists by early this AM.

What has likely been a big help (and can help even more) is a link to the teaser video (below) that Trent posted Saturday night on his social accounts, including going live about it on Periscope and Facebook live.  As of Sunday morning, 5.4 K have watched it and I predict it will hit 10K and beyond within a day or so…if the fans rally.

Update Wednesday 7/6/16: #TheresAGirl is #11 on the Billboard and Twitter Emerging Artists list and #30 on the iTunes hot country chart, just behind Brad Paisley’s Without A Fight featuring Demi Lovato. According to Rick Barker, American Idol’s social media mentor and advisor to Big Machine artists including Trent, the more fans share and talk about the song, using the stream and download links and hashtags from above, the better.  And request it at your radio station leading up to, and after, it hits radio July 18.