Season 15 American Idol winner Trent Harmon’s first big headlining concert almost got rained out tonight at the Tupelo Elvis Fest. But Trent and crew, the organizers and the crowd held tough. After a 30-40 minute delay, Trent and his sharp young band appeared before a soggy, but enthusiastic crowd.

The music was an excellent combo of songs that Trent sang on Idol plus a few classic country songs, at least two Elvis numbers and some new tunes including Trent’s pop-rock-country single,  “There’s a Girl!”  I’m not a betting person but that one seems like a slam dunk hit.

One thing I noticed about Trent was a bit more grit and muscle layered under his, “I just try to sing pretty” voice. I liked it. He showed he can front a band. too, with lots of energy and movement that we never really got to see on Idol.

My photos from tonight aren’t stellar — partly due to the rain – and partly because I was having technical difficulties. Plus, they are a jumbled mess on three different cameras. But I’ve included a few stills, along with a set list, below.

Trent’s band was great to watch and hear despite only playing a short while together before the concert. Ryan, who got a call from Big Machine just a few weeks ago to audition for the band, moved to Nashville two years ago and has drummed for budding artist Casey Jamerson (even opening for Charlie Daniels Band and Keith Urban) and paid dues gigging on Broadway. Ryan said he’s excited about his new gig with Trent and appreciates Trent’s natural singing talent. “He’s really good,” Ryan said.

Likewise, Trent seems pretty proud of the band guys, too. When he paused during the concert to introduce each member he joked he was more nervous about remembering their names than singing the songs. No worries, he got through it!

Trent Harmon Set List for Tupelo Elvis Fest (I hope I have the order right): 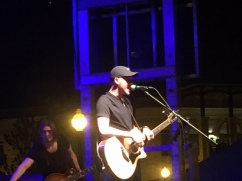