Our 16 hour visit in Memphis was focused on food and music. I’ll start with the food! At the suggestion of Anthony our bellman at the Westin Hotel, Dan and I headed to Central BBQ in downtown Memphis for dinner. Central BBQ was started in 2002 by two guys who met in area BBQ competitions and have built deep BBQ cred, landing in the #1 spot on USA Today’s 10 Best list of best Memphis BBQ joints and pulling up in just about every “where to eat in Memphis” list I searched online. 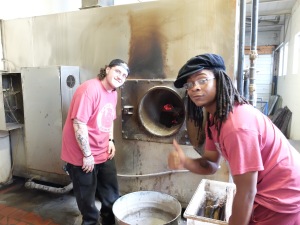 Within just a couple of minutes of ordering at Central BBQ, which you do at a window on the way into the large dining room, we found ourselves in the kitchen to see, “where the magic happens.” Our impromptu tour guides were workers Brandon and Austin. Those two friendly young guys were exactly what any PR department would order, enthusiastically explaining how the meat is cooked, “low and slow” for the best taste and texture. They showed us where the pork ribs are cooked for 5-6 hours at 260-270 degrees in a giant hickory-fired oven and pork shoulders are cooked for 12-13 hours. The meat is dry rubbed and marinated with a special recipe beforehand.

Too bad I’m not a better food stylist and photographer because my snap of the Rib Combo we had doesn’t do it justice. Our platter came with pork ribs, pulled pork and smoked turkey plus sides including two rolls, slaw and BBQ beans. Since we split the meal, we added an order of Central BBQ’s homemade potato chips which I’d read about and a side of potato salad got tossed in, too. The ribs were very tender and the crusty “bark” on the outside was crispy and delicious. We slapped the pulled pork onto buns and topped it with slaw like I’d seen in the menu picture. The smoked turkey was moist and not too salty, just right.

It took about 12 minutes for us to gobble it all down, it was so good.  While I’m sitting here writing, Dan is out for a walk to work off some of that goodness. Uh oh, blogging could be trouble for me.

One Response to “First stop, Central BBQ in Memphis”