Last night Dan and I went to the Adler Theater in Davenport to see Harry Connick, Jr.  I surprised Dan with the tickets who’s been a fan ever since I coerced him into watching American Idol with me.  Harry is a pro and he puts on a good show.  He’s a great piano player and singer, and he has a talented, horn-centric band. (He is from NOLA afterall.)

Dan and I especially loved Harry’s natural and warm back-and-forth with the crowd, which we noticed seemed a bit older than most concerts we attend. Harry had fun ribbing a fan who has been to 70 odd concerts. He teased a young fan about who was a better piano player, Elton John or him. And he brought a lady on stage to sing with him after she caught his attention with a Mardi Gras style parasol. He’ll use those skills as host for for his daytime variety show “Harry” coming this September.  Go to his Facebook page at https://www.facebook.com/harryconnickjr to sign up to win two tickets and trip to NYC.

Oh, yeah, I almost forgot. Harry did do a bit of country. He strapped on a black acoustic guitar and sang a countrified version of his song, Nobody Does I do Like We Do. Not bad but my favorite was One Fine Thing.

Unfortunately, no photos inside the theater were allowed  (I’m a rule follower) but I took a few outside, including a shot of Dan passing the tour buses. 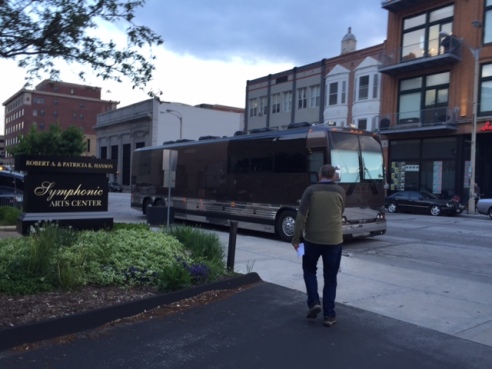