If Keith Urban had a kid sister, she could be Lindsay Ell. If Lindsay Ell had a cool auntie I think she might be Bonnie Raitt. Whew. That’s lots of talent for one family.

Fairy tales aside, talent was clearly on display Friday night when Lindsay hit the stage at 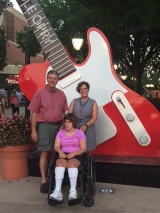 the Grand Ole Opry. My family ended our Tennessee vacation with a visit to the Opry, something we like to do whenever we have the chance.

Lindsay led off with her new single All Alright, an upbeat tune that reminds you life’s all good if you have the right co-pilot. (Yep.) With a purple electric guitar strapped on her hip, Lindsay stepped out in front of the band for a short but sizzling solo.

The Calgary native has the cred for lead guitar playing and bluesy solos. Lindsay once toured with Buddy Guy and has opened for several big country acts, including The Band Perry, Luke Bryan, Big & Rich and the man Mr. Urban. She’s about to head out to support Kip Moore and she’s got some opening dates for Brad Paisley, too.  She’s been playing guitar for years. Her website notes fellow guitarist and Canadian Randy Bachman (Bachman-Turner Overdrive and The Guess Who co-founder and writer of rock classics like American Woman and Takin’ Care Of Business) discovered Lindsay when she was just 13. 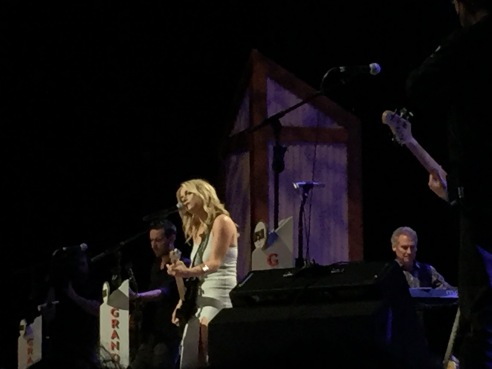 All Alright, co-written with songwriters Jimmy Robbins and Laura Veltz, sounds like a radio hit to me – I hope so.

But what took my breath away was the next number. It was really two songs in one, with three powerful elements. First, Lindsay stood completely alone on the stage for a dramatic acoustic guitar intro. Then a male backup singer joined her for Eyes Off You, a song she explained that she wrote about, “falling in love with someone that doesn’t love you back.”  Then she seamlessly fused into Ms. Raitt’s classic I Can’t Make You Love Me.  It was emotional and powerful and I’m sure there’s a back story. Sad. For some boy.

Like Keith Urban and Brad Paisley,  Lindsay is one of country’s triple threat artists. She can sing. She can play the heck out of a guitar. And she writes beautiful songs. Earlier this year, the Stoney Creek Records artist was part of CMT’s Next Women of Country tour with Jennifer Nettles, and Lindsay has been nominated for a CMT Music Award and Canadian Country Music Association awards.

Although Lindsay has had some enviable US radio play, including with her last single By The Way, she’s yet to crack the top ten. I first heard Lindsay a year or so ago listening to The Bobby Bones Show  – the radio host is a fan. Now that I’ve seen her play and sing, I’ll be requesting her on my local station often.

After the performance Lindsay signed autographs at The Opry Store and I managed to get a quick selfie with her. I later asked her via Twitter the one word she’d use to describe playing in the Opry circle. “Memorable,” she replied.

Yes, Lindsay, the night was very memorable – thanks to you and all the other wonderful Opry performers, including: John Conlee (such a great recognizable voice); Cassadee Pope (lovely); Mike Snider, The Whites (both uber talented acts); Strking Matches (intense); TG Sheppard (dang, I missed him); Connie Smith (also lovely); Bobby Osborne and The Rocky Top X-Press (their rendition of Rocky Top sent the place up for grabs); Chris Lane (wow); Ricky Skaggs (loose and entertaining) and Selah (powerful). If you get the chance to go to the Opry, don’t hesitate for a second. So fun! 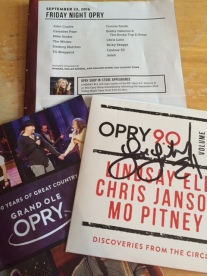 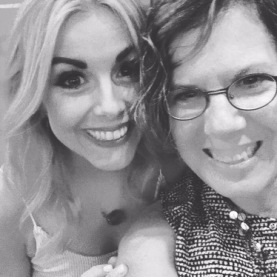